Sandor Dargo's Blog
On C++, software development and books
Blog 2020 12 23 What is virtual inheritance in C++ and when should you use it?
Post
Cancel

What is virtual inheritance in C++ and when should you use it?

When we start coding in an object-oriented programming language we often think that it’s about building nice inheritance hierarchies. So we do. A bit later we learn that we should rather use composition over inheritance. So we do. But we still need inheritance, and from time to time we run into problems where it seems to be the only way. At those times, we might learn about some more specialized forms of inheritance. In C++, this might mean private inheritance or virtual inheritance. Today we speak about the latter.

What is virtual inheritance?

Virtual inheritance is a C++ technique that ensures that only one copy of a base class’s member variables are inherited by second-level derivatives (a.k.a. grandchild derived classes). Without virtual inheritance, if two classes B and C inherit from class A, and class D inherits from both B and C, then D will contain two copies of A’s member variables: one via B, and one via C. These will be accessible independently, using scope resolution.

Instead, if classes B and C inherit virtually from class A, then objects of class D will contain only one set of the member variables from class A.

As you probably guessed, this technique is useful when you have to deal with multiple inheritance and it’s a way to solve the infamous diamond inheritance. 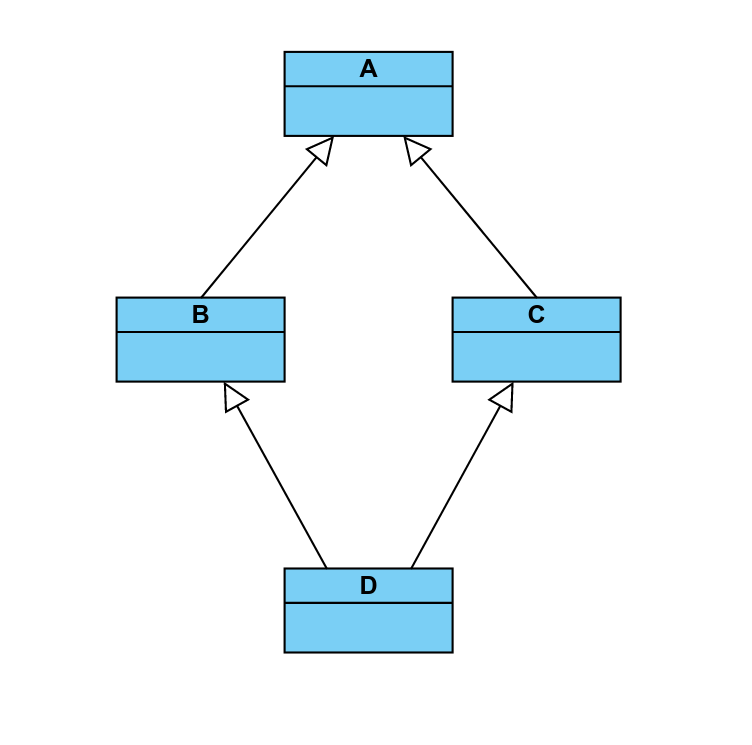 Consider the following class hierarchy to represent the diamond problem, though not with pure abstracts.

An attempt to directly bind a reference to the Person subobject of a TeachingAssistant object would fail, since the binding is inherently ambiguous:

To disambiguate, we would need to explicitly convert ta to any of the two base class subobjects:

In order to call speak(), the same disambiguation, or explicit qualification is needed: static_cast<Student&>(ta).speak() or static_cast<Worker&>(ta).speak() or alternatively ta.Student::speak() and ta.Worker::speak(). Explicit qualification not only uses an easier, uniform syntax for both pointers and objects but also allows for static dispatch, so it would arguably be the preferable way to do it.

There should be only one behaviour

The real-world meaning of “exists only once” is that a TeachingAssistant should have only one way of implementing speak, not two different ways.

In our degenerate case, Person::speak() is not overridden in either Student or Worker, but that could be different and then we would TeachingAssistant would have multiple implementations of the speak() method.

If we introduce virtual to our inheritance in the following way, our problems disappear:

Now we can easily call speak().

This can be done through vtable pointers. Without going into details, the object size increases by two pointers, but there is only one Person object behind and no ambiguity.

You must use the virtual keyword in the middle level of the diamond. Using it in the bottom doesn’t help.

You can find more detail at the Core Guidelines and here.

Should we always use virtual inheritance? If yes, why? If not, why not?

The answer is definitely no. The base of an idiomatic answer can be the most fundamental idea of C++: you only pay for what you use. And if you don’t need virtual inheritance, you should rather not pay for it.

Virtual inheritance is almost never needed. It addresses the diamond inheritance problem that we saw at the beginning of the article. It can only happen if you have multiple inheritance, otherwise, you cannot have this issue.

At the same time, it has some drawbacks.

Virtual inheritance causes troubles with object initialization and copying. Since it is the “most derived” class that is responsible for these operations, it has to be familiar with all the intimate details of the structure of base classes.

Due to this, a more complex dependency appears between the classes, which complicates the project structure and forces you to make some additional revisions in all those classes during refactoring. All this leads to new bugs and makes the code less readable and thus less maintainable.

ISO C++ guidelines also suggests that C-style downcasts cannot be used to cast a base class pointer to a derived one.

The problems can be solved by dynamic_cast, but it has its performance implications. Using too much dynamic_cast in your code can make a big hit, and it also means that your project’s architecture is probably very poor.

You can always implement what you need without multiple inheritance. There is no surprise in that. After all, the feature of virtual inheritance is not present in many other major languages, yet they are used for large and complex projects.

Today, we discussed the diamond inheritance problem. We understood that when there are multiple paths between a base and a derived class, there are multiple base objects instantiated which is almost never desirable. C++ proposes virtual inheritance to solve this problem and letting such structures to live with only one instance of a base class.

Yet, as you should only pay for what you use, virtual inheritance should not be your default choice. Most projects can be implemented without such a language feature and if you can design your software without multiple inheritance, you don’t need to deal with its downsides.

Have you ever used multiple inheritance in your production code? If yes, what was the use-case?

Can virtual functions have default arguments?

Yes, they can, but you should not rely on them, as you might not get what you’d expect. If you wonder how this topic came up, the answer is static code analysis! We have been using static code a...

This topic came up recently during a coding dojo in our department, while we were working on the ugly trivia kata. We wanted to extract a struct, containing the player data. Later we wanted to turn...

The quest of private inheritance in C++

I love mentoring. It requires a huge quantity of humility, and if you possess it, it will bring you tremendous benefits on a human as well as on a technical level. A few weeks ago, I met with on...

Good to Great: Why Some Companies Make the Leap...and Others Don't by Jim Collins