The first thing that is important to clarify about this book is that it’s not about self-development. It’s not about how to become better as an individual. It’s about companies. This book is the summary of a long research on why some companies who used to be average make the leap to become great. I won’t go into details on the definition of great, but the bottom line that great companies outperform the market for a long time and with different CEOs.

The right people will make the change

The author, Jim Collins, and his team found many surprising facts buried into the data they gathered, in the interviews they conducted. One of these was about the Who. The Who turned out to be more important than the What. What you do matters less than who you work with. When Hewlett Packard was created, they tried to make many different things until they found their market, but until that point, the founders were busier to find the most talented engineers. They had the vision that it’s simply more important to have the right people on the bus - based on their traits, not based on their actual knowledge - and get rid off the people who didn’t fit. And this attitude happened to be a recurring finding in the study. If you want to hire someone and it’s not a hell yeah, just keep looking, until you find the right match.

And once you have the right people, they will take care of the rest. What is also important is to assign your best people to the biggest opportunities, not to the biggest problems. It might mean that they are assigned to a small product and it might be seen as a demotion, but so often it turns out the best move. Something small but, but with big potential becomes great. And that’s something that would never happen without the best people.

James Stockdale was a pilot in the Vietnam war whose plane was shot down in 1965 and soon he found himself in the hands of the enemy as a prisoner of war. He spent more than 7 years in the infamous Hanoi Hilton that is home to communist propaganda nowadays.

He managed to survive the brutal tortures due to his Stoic mindset. Moreover, he was a moral support to his fellows in the prison. As he explained later, those who were unrealistically optimistic, those who always had those thoughts to be out by next Thanksgiving, next Christmas, by the new year, etc., they didn’t survive, they couldn’t make it.

But those who confronted the brutal facts, yet they had faith, they could prevail till the end.

Confronting the facts, even if those are awful, yet having a faith in a better future was one of the few characteristics was shared among the good to great companies. They recognized that they cannot beat another company in the niche they were operating at, they recognized that all their shops represented the past and they had to completely rebuild their chain. They were not afraid of acknowledging these facts even if they were accompanied with long and heated debates.

However, it was also important to look into the future with faith. Even if they had to completely turn around their businesses, they had a healthy faith that with the good people on the bus, they will manage to do it, they will succeed in the end.

That’s the Stockdale paradox that kept many prisoners of war alive and helped companies to become great. Confronting the brutal facts, yet having faith that you’ll prevail.

If you’ll take away only one thing from the book, it should be this.

Why this name? Do you know the essay “The Hedgehog and the Fox” by Isaiah Berlin? In it, the author divider the world into hedgehogs and foxes based on an ancient Greek parable: “The fox knows many things, but the hedgehog knows one big thing.”

Interestingly, the great companies were not the ones who kept diversifying for better survival chances during the market ups and downs, no. The most successful companies were highly concentrating on their one niche.

In order to find that niche, they had to answer 3 questions and find the sweet spot: 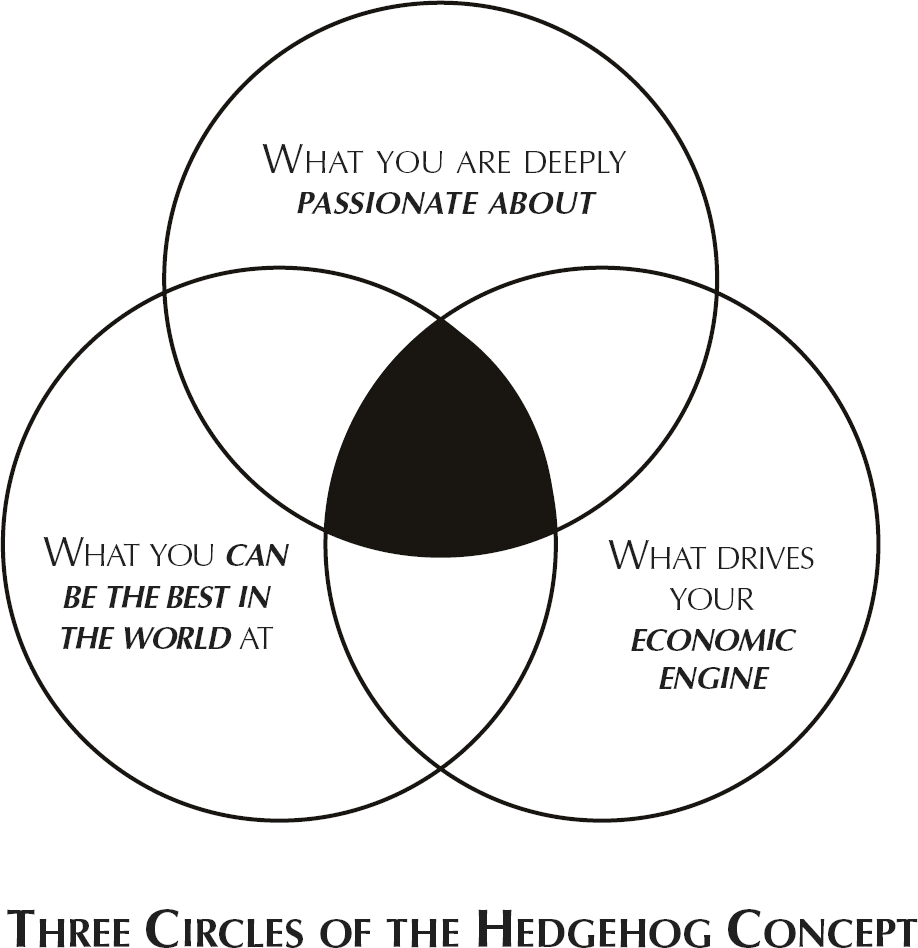 The second question is probably the most interesting one. Good to great companies’ transformations usually didn’t happen revolving around their core business. They didn’t answer the question on what they were the best at. They had to understand what they can become the best at in the world. Often, it meant to turn the business completely around.

To form such a hedgehog vision, companies needed a lot of time. They didn’t simply try to answer these questions. There were a lot of debates involved while trying to understand what and how they were doing.

But by the time, they realized what they could be the best at, it seemed just right. It was not anymore some reckless statement. They acquired such a deep understanding of their companies that it simply seemed self-evident, a truth that speaks for itself.

Finally, the author discusses how drastic changes happen. Overnight, right? Not so much. Not so fast.

Even if a change looks dramatic from the outside, in reality, it’s accumulated from many small steps.

Each small step adds up to the change, though they are not spectacular. The author used the flywheel as a metaphor. These small changes put the flywheel representing the company’s momentum in motion. And with each small addition, the momentum builds up until the breakthrough from where very little efforts are actually needed to keep flywheel turning.

The companies that succeeded, didn’t try to jump to the breakthrough points. They continuously tried to get better and to build on their strengths. On the other hand, many companies feel the urge to jump to the breakthrough as they often seem one-night successes. Unfortunately, such companies miss the point and they fail. They soon find themselves in a downward spiral, in a doom loop that is very difficult to get out from.

Good to Great is a must-read if you are looking for the concepts that help many companies to become significantly better than the rest. According to the research conducted by [Jim Collins] and his team, great companies focused on having the right and only the right people first.

They were not unconditionally optimistic. They had a strong faith that they will endure and make success, but they were not afraid of confronting the sometimes brutal facts of reality. This is also called the Stockdale paradox.

The leadership teams of these companies strongly focused on understanding themselves, the companies, the business in general, until they could form their Hedgehog concept around what they are passionate about, what they could be the best at the world while still being profitable.

The companies that became successful also understood that Rome was not built in a day. Real, enduring success never arrives overnight. It takes many small steps to build up momentum until your flywheel starts spinning almost without efforts.

While Good to Great is a book about companies, I think that even on the individual level it is useful and conveys messages that we cannot ignore. I’m convinced that we should all build our Hedgehog concepts and after all, the Stockdale paradox is not coming from companies.

What is virtual inheritance in C++ and when should you use it?

2020: A year of changes and great results, can't wait for the next one!