This May, I had the chance once again to attend Riviera Dev and even to speak about my hobby. Was that gastronomical? You bet it was! But more on that later.

This was the second year that the conference started with an additional hands-on day. My employer gives out more than a hundred tickets to its employees which are valid for the normal days. As a speaker, I received admission for the extra day, which is a cool benefit!

In the morning I went to a hands-on lab about the newest Java SDKs. Rémi Forax who is a Java champion and contributor of many Java expert groups spoke a little bit about the history of Java and said that it’s not a very original language, it always just took the good things from other languages. Except for two things. Java was the first to have interfaces and wildcards for extensions. It was hilarious to hear this from a person like him, and after all, there is nothing wrong in combining from others what were already proven to be good.

We spoke a lot about (un)mutability and the new C struct like data container in Java that is called record. What is interesting about it is that it’s immutable and doesn’t have generated bytecode for the equals/hashcode/toString functions, instead, the JDK is called directly.

He also spoke a lot about returnable switch expressions, but instead of going into details, I’d like to just share one of his closing thought.

“Don’t do concurrency by hand. Even for pros, it doesn’t work well.”

Then he mentioned the different SDK constructs you have at your hands to avoid doing concurrency by hand.

In the afternoon I attended a lab about Progressive Web Apps. I did it because I didn’t know what they are and I wanted to learn. The interest was really high, the room was full, many of us were sitting down on the floor with our laptops in our laps. Kudos to the organizers who brought some extra chairs inside in a couple of minutes and made those free hours more comfortable.

The goal of the session was to turn a webpage written in pure HTML/JS into a Progressive Web App. If I understood well, a PWA needs two things: https and a manifest file. Having a local https is not extremely difficult, but not so easy either. Especially, if you can’t just install anything on your machine - which is the case on most company laptops. In fact, I got quite stuck and I couldn’t make my app work - with Chrome. With Firefox it was rather fine as I realized at the end.

Anyway, I appreciated a lot this session and now I have a high-level idea about PWAs.

There were 4 different tracks during the two days which means a lot of presentations. I don’t write about all that I attended just about a few that I particularly liked.

Tifanny Souterre spoke about Tensorflow and how to hack the hell out of Machine learning. It was fascinating to see how you can delude AI with the proper knowledge. You take a sane image, you add some noise and you still see a sane image. Or you take some really funny looking glasses made and your friends can still recognize you, right? Well, maybe the AI can’t! Maybe from Reese Witherspoon you become Russel Crowe.

I enjoyed Tiffany’s presentation because she managed to mix good examples with the mathematical and programming background.

I have to speak about the fourth, the last, but not least important track: “we are not just devs”. No, we are not only software folks, we are… wait for it… eaters too!

I went to three sessions about gastronomy during the two days.

Sarah Tatouille and Adam Edicoffer already brought us some delicious truffles last year and they did the same once again. They really brought us the same recipes, except for the gnocchi, which was this year. But having the same is not bad at all if it’s delicious. Believe me, they were.

It’s really useful that they deliver their session together. While one cooks and serves, the other can speak about the truffles, the different ways you can prepare them.

Thank you once again for the perfect bites before lunch.

I only took a light one, because right after lunch it was my presentation coming, still about food. In particular about bread.

About 7-8 years ago we started to make our own bread with my wife and for about 3 years we are raising our own sourdough and bake not just most of our breads but even some sweet pastries with this traditional method.

I think my presentation went well, though I was extremely tired. Baking with sourdough involves quite some planning and I’ve never baked 4 different recipes in such a short time. The awesome speakers’ dinner made it even a bigger test as it removed an evening from my schedule. But I accepted the challenge and it was totally worth it.

I’m really happy that so many people came and hopefully most of them liked it.

Some might think it’s strange that I talk about non-technical topics at RivieraDev, but I find them awesome possibilities to practise presentation skills and also to get to know more people in the local community. Besides, it’s a conference mostly dedicated to the Java world and I’m more involved with C++ these years.

Anyway, this year there were some new shorter talks opened a bit more for soft/core skills, so next year I’ll try to present probably about code reviews or coding guidelines.

After I finished my talk, I took care of all the items I brought with myself, I had the sandwich I stashed away at lunch and didn’t attend anything from the next slot. Instead, I walked around the stands and talked to people.

I think I’m infected now by the security mindset. At one stand, we could fill a form on a webpage to win something and I found that with a double click on the form, I could retrieve names and corresponding e-mail addresses and phone numbers. I shared the problem with the people at the stand, they kindly said thank you and started to make some calls. It’s funny to find these issues at such scenes. We have a lot to do in terms of data privacy just everywhere!

Even though I discovered this data privacy issue - and probably there were others, not just digital ones - security was not neglected. We even had an interesting presentation in French by Julien Topçu basically about the OWASP Top 10. I think it’s a very good starting point for those who are not directly involved with Secure Development Lifecycle activities. Probably you can’t find a more competent person in the neighbourhood than someone who is a member of the OWASP organization. Thanks, Julien, it was an interesting and very important presentation!

I wrote that I attended three food-related presentations, but I only mentioned two so far. The third one was coming right before lunch on Friday. Well, it was not a presentation, it was something much better. Anthony Le Brière who is barbeque champion in France come to RivieraDev! He brought a smoker and some barbeque grills and shared some key points about how to successfully barbeque at home and how to avoid that right after a couple of unsuccessful tries you got fed up and sell your precious grill. While he was talking a nice chunk of pork was getting barbequed, not to mention that big piece of salmon.

There were also some sausages and chicken. With those, we could help. Both with the preparation and the grilling part. 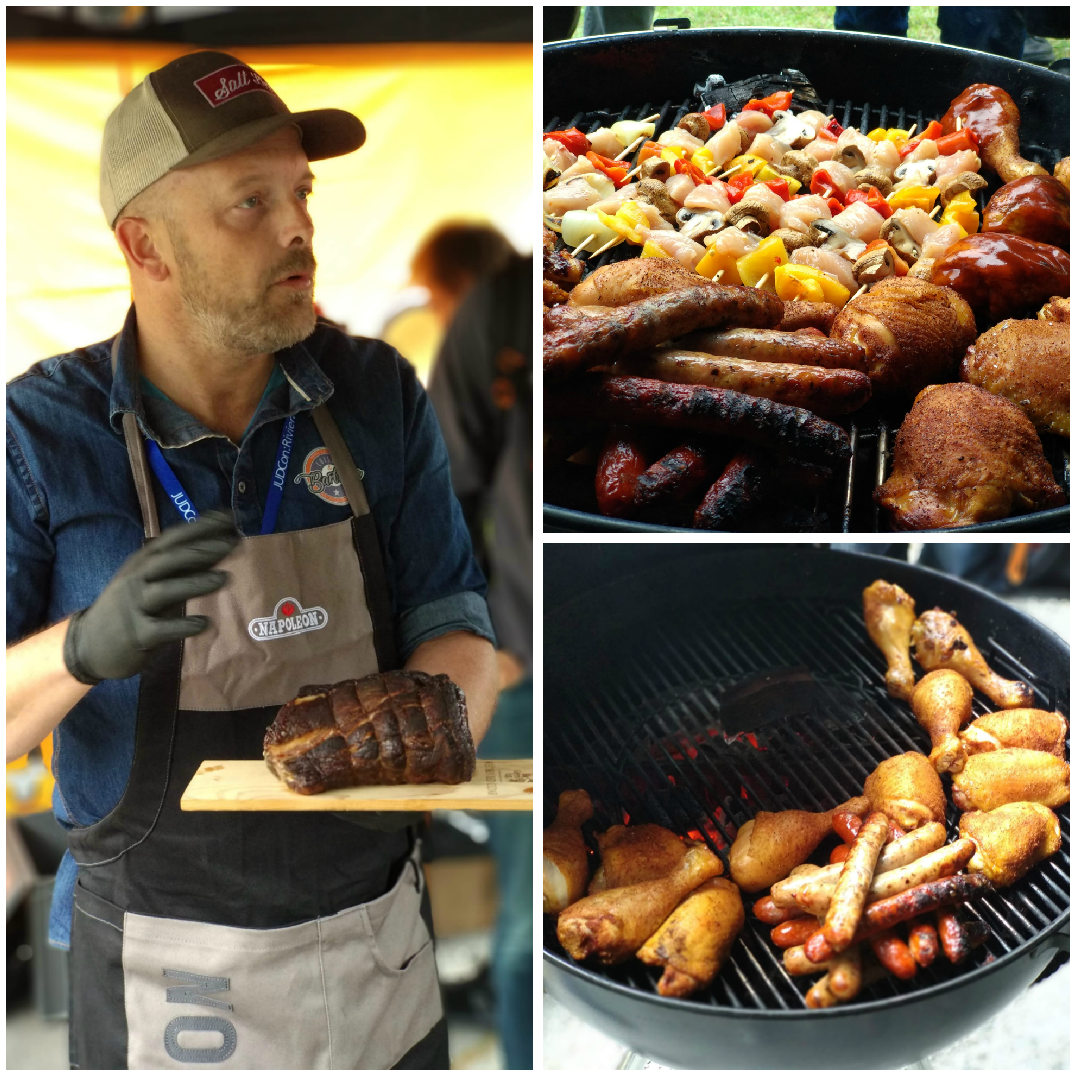 The workshop went well into lunchtime but it was totally worth it. Everyone could taste like 4-5 different types of meat and as he brought slices of bread and rolls and different sauces, we could all prepare a hot dog or a sandwich.

I stayed around afterwards and asked a couple of question about the thermometer Anthony uses, probably I’ll get my own one. Not for barbeque, but for baking and roasting some meat in the oven.

There are conferences where the talks give you the biggest value and there are others where the side talks. I used to work in Java in a couple of projects, but I’m more a C++ guy as I already mentioned. Probably this also explains that while there were a lot of great presentations, to me the side talks gave more value this year. But it’s not a problem at all, it just means that very interesting people attend the conference which is the merit of the organizers!

I’m grateful that I could be there at RivieraDev and I wish good luck to the team and especially to Michèle Legait who is taking over the lead from Stéphane Épardaud after so many successful years.

dev
trip report travel report conference techtalks
This post is licensed under CC BY 4.0 by the author.

Right after I was returning from a three and a half weeks long road trip with destinations in 5 countries, then attending an advanced presentation skills workshop, I was finally heading to the airp...

Last week, I “went” to the C++ On Sea 2020, which was my second C++ conference, after CPPP 2019. I put went between quotes because as you might have guessed due to the Coronavirus, the organizers h...

I feel very lucky that I could attend so many C++ conferences during the last 2 years. It feels a bit strange, but without Covid, this would not have been possible. My last conference was Meeting ...

The C++ Standard Library: A Tutorial and Reference by Nicolai Josuttis