Sandor Dargo's Blog
On C++, software development and books
Blog 2022 08 03 Price's law and 3 things to do if you're underpaid
Post
Cancel

Price's law and 3 things to do if you're underpaid

Are you irritated when you hear about the increasing company earnings? Are you upset when you see salary statistics? Do you often feel underpaid?

Your contribution grows faster than your salary

Price’s law says that 50% of the work is done by the square root of the total number of people who participate in the work.

This means that in a team of 10 people, 3 persons bring half of the contributions. This might not seem surprising, probably you have had similar feelings.

Let’s raise the stakes. In an organization of 100 people, 10 people will bring half the contributions. In a corporation of 10,000 people, 100 are responsible for half the outcome. These are more surprising numbers. 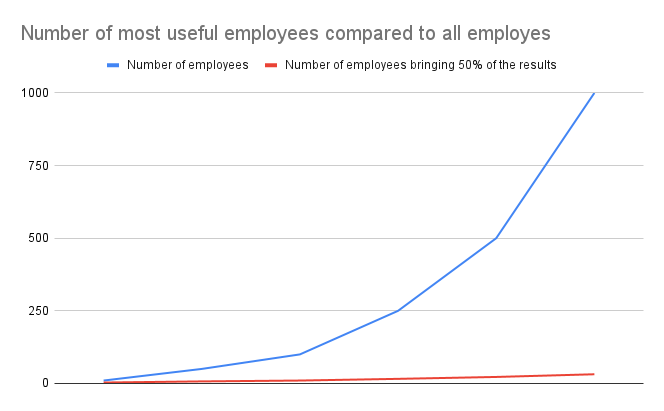 In terms of salaries, it means that you should not pay people closely equally if you want to pay them fairly. In many corporations, salaries grow much slower than contributions. Even though fair compensation should represent the level of contributions.

Otherwise, why would anyone contribute more than the others?

Let’s ignore that some people don’t know that they contribute more than average. Usually, they are very much aware of it. If not yet, they will be soon.

People without skin in the game (e.g. top managers, HR representatives) like to tell that you don’t work for money, but for big challenges and you are all part of one big family. The usual corporate bullshit.

They are either living in another world or they simply lie.

I hope they lie because these people usually ditch their companies so fast when they have a better opportunity. I hope they wouldn’t do the same with their families.

So basically as an employer, you can rely

But what can you do as a top performer employee if you think you’re underpaid?

Do you think it would change in another organization?

The answer is probably no. Price’s Law is general. Of course, you’ll find exceptions, but exceptions don’t define the rules.

Those who are top contributors in one organization are likely to perform similarly in other places as well.

What about the salary differences?

Well, the differences might vary from company to company, but it’s more the function of the country than the company. In my home country, Hungary, a senior developer can easily make 3x more than a junior and that’s the case in London too - as far as I can tell based on the job ads. But in France for example, it’s very rare.

If you are a top performer and you feel you’re underpaid compared to juniors, you should probably think about in which country you should live and work taking into account the salary gap between juniors and seniors. Some countries like France are more beneficial for juniors and others like the UK are better for senior developers. Of course, it’s more complicated than that and it seems to change with the several full remote options these days in this trimodal market we are in.

Though this choice is not only about money, I know.

In any case, Price’s Law is not simply about junior and senior contributors. There are seniors who simply contribute way more than other seniors, yet they are not paid comparatively more.

That’s a tough nut to crack in any country.

Is it really worth negotiating?

If you’re not fed up with your employer and you’d be happy to stay, try to negotiate for a bit more money (or other benefits). When I first wanted to write this article, the market was hot. Nowadays it’s a bit cooling down. But as a top performer, you always have a bit more leverage than the others.

Here you can find some useful material for preparing for a negotiation. Be prepared and know that the larger the company, the more difficult it is to get a better offer.

Managers’ hands are usually more tied and even if they immediately offer you something, it’s not as good as you might expect.

A friend of mine who recently changed companies told me that when he received a new offer, his n+2 came with a new offer almost immediately and he said that that’s the best he could do, but he can go higher to ask for more. My friend told him not to, it’s not worth the hassle.

Why? I asked. After all, the difference was not so enormous between the counteroffer and what the other company proposed to him.

He said that if he accepted to stay with the counteroffer, he would ensure that he’d receive no relevant increase during the next couple of years, while at the new place it’d be still probable.

I’m not 100% sure he was right, but his words are worth thinking about.

I still think it’s worth negotiating, but probably before you invest too much energy in looking for another job. The problem is that often your employer will only take you seriously when you come with an offer. But by that time, you’ve invested so much in interview preparations and fantasizing about other companies that you’re committed to leaving.

If you really want to stay, negotiate. Negotiate before you’ve spent months preparing for your leave. Once you committed to leaving, don’t take counteroffers. You aren’t simply a liability, but as my friend explained, you’re almost surely giving up on increases in the near future.

What about limiting your output?

So you’re contributing way more than the others and you’re underpaid.

If getting more money is not an option and you want to balance what you give with what you get, you could also limit the time you spend at work.

If you can quantify how much you and the others contribute, if you know how much each person earns then you can calculate how much would be a fair salary compared to others. Or how much you should work. If you know the numbers, it’s pure math.

But you probably cannot calculate precise numbers. And how would you work less anyway?

Don’t work more than the others

If you are a top performer, probably you won’t have to work less than the others, but you should not work significantly more. I cited a couple of times on this blog the research that was made on how people spend their time at work. 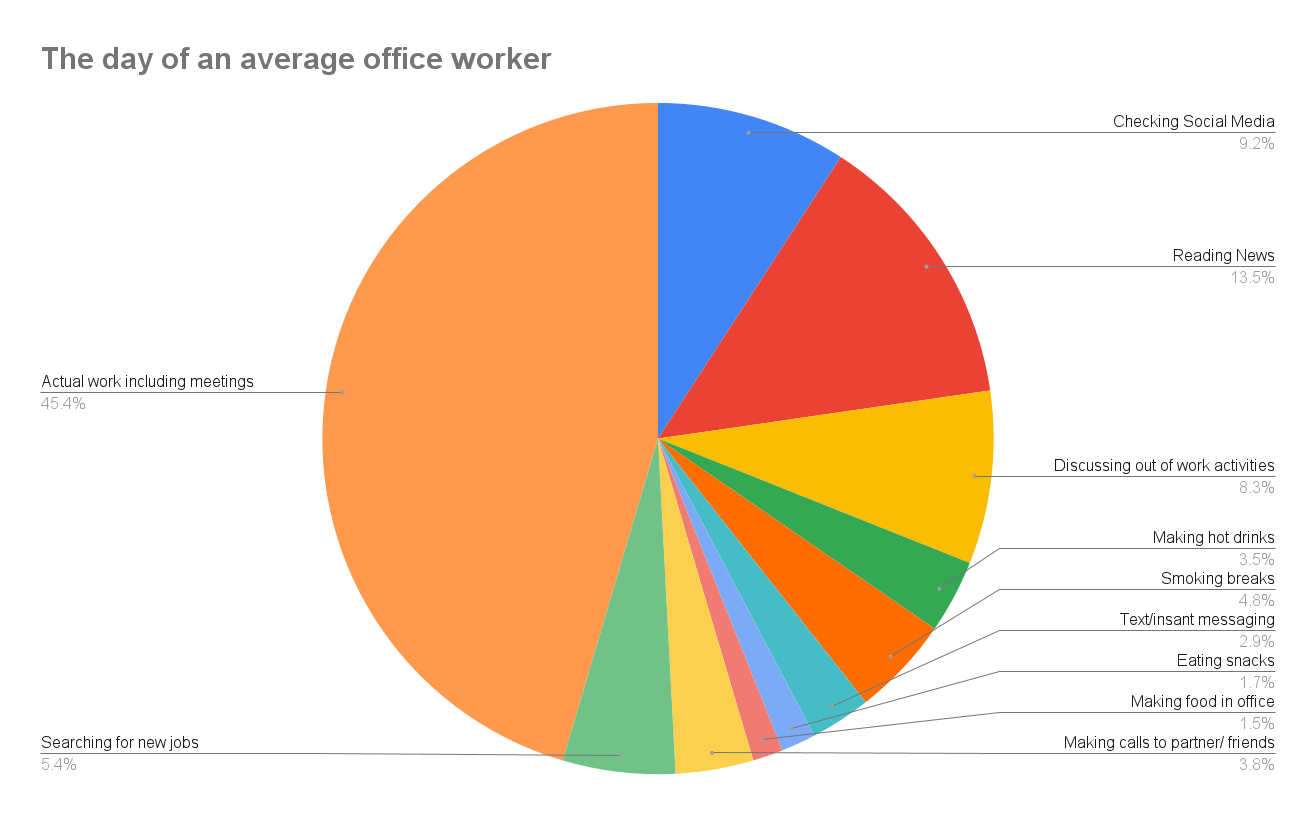 On average, we spend around 3 hours on productive work. The rest goes on social media, chatting, browsing, whatever, you name it!

But if you are a top performer most probably you spend much less time on such wasteful activities and you work more and therefore you deliver more.

I’d discourage you from doing anything directly business related, as you clearly should not make another active income in your work time. I’d rather suggest building your online presence. You can either write blog posts or you can build your social media account.

Almost everyone is wasting their time on Facebook, Instagram, etc. You do nothing bad if you also spend some time on social media. But instead of being a consumer, go out and create content!

If you build up a decent follower base, you might even monetize it later on.

Another important aspect is that if you build a professional account, you can build your internal authority from the outside. My way of becoming a principal engineer was clearly helped by my online presence, my articles, and my conference talks.

Though I wouldn’t solely use the extra time to work on an online presence. I’d also invest the time in learning.

Do something mutually beneficial

I’d invest some time in learning about technologies, methodologies, and techniques that are useful both on the market and in your current position. Given that we assume that you’re among the few people delivering 50% of the results, there must be an overlap between your market value and the value you bring to your employer.

Invest time in learning more about mutually beneficial items. It will allow you to do your job even better and probably with enhanced efficiency. This means that you’ll have even more time to invest in learning and in building your online presence, or whatever you can, whatever you want.

Of course, this cycle is not repeatable indefinitely, you cannot increase your efficiency and contribution beyond a certain level.

Still, your knowledge can be increased virtually indefinitely and you can raise the gap between you and the others. As Richard Hamming, the famous American mathematician said, “I always spend a day a week learning new stuff. That means I spend 20 percent more of my time than my colleagues learning new stuff. Now 20 percent at compound interest means that after four and a half years I will know twice as much as them. And because of compound interest, this 20 percent extra, one day a week, after five years I will know three times as much”.

This should be your goal. Delivering way more by working way more than the average is simply not worth it. Delivering a bit above average because you learn so much that you can do it with less work is definitely worthwhile.

You can be among the top performing developers by learning more and therefore knowing more than the average. If you think about times when you were stuck for hours or days and a more experienced colleague came and solved your issues in a matter of minutes, you know it’s possible.

Wouldn’t it be great if people who contributed much more than the average would be paid so? According to Price’s Law, in most organizations, you’ll find that a square root of the people brings half the results. Yet, it’s rare to see that these people reap half the benefits.

If you are among the top contributors and you’re not looking for entrepreneurial career, you have few options in the pursuit of fairness.

You can negotiate or even take another job, but while it might improve your situation, it will not completely change it.

At the same time, you can limit your output and spend more time on items that will help your career, such as building your brand both inside and outside, and on learning so that you can deliver above average in less time.

If you’re a top performer, make sure that you don’t work for free. Invest your time in building your brand and in learning. Learning will stabilize your position.

And if you’re not a top performer? Never mind, maybe you don’t even want to become one. In any case, I highly recommend start investing some time in learning every single day. In the long run, consistent learning will make you grow exponentially.

After having read the title, you must think I forgot something. How can two vertices (the employee and the company) form a triangle? The answer is simple, the employee takes up two of the three ve...

The 4 Different Levels of Autonomy

It’s an awfully mainstream question nowadays that who should a company keep or whom it should let go. The question stands firm from the other side as well. What is a fair selection? Why me? Or if y...

The copy and swap idiom in C++