It’s such a cliché to say that the year was busy. But it was. Probably it’d be better to say it was incredibly fruitful, even though I didn’t meet many of the goals I set for this year.

Anyway, it’s time to review what happened and as always focus on the gain, not the gap.

As I’m still working in software development, which is the main topic of this blog, let’s start with discussing work.

What goals did I have?

I know that my manager had in mind more coaching and involvement in my home team, but that’s not what happened. I joined my new team in February and by April I knew that I would leave sooner than later. The market was still hot and our salaries didn’t follow. I decided to dedicate most of my free time to preparing for interviews. I spent probably 1-2 hours a day for about 2 months (it’s not even THAT much!) and it had its results. (You can read about what I learned during my job search here)

On my way to C++ On Sea I received a positive answer from Spotify, I gave notice in July and in November I finally joined the band!

Now obviously it’s very early to say anything realistic, it’s still the honeymoon period, but based on what I’ve seen I like my new place a lot and finally, I started to do some real work after a long but useful onboarding - which has not finished by the way.

I still use most of my free time in the early mornings and late evenings to learn and write. Did I meet my goals? Some yes, some completely not.

I did manage to get into some conferences and finally, I could travel to my first onsite C++ conference in Folkstone in the UK. Yes, that was C++ On Sea! Such a great experience! I met so many smart developers and kind people! I absolutely loved it!

I also met my goal in terms of publishing The Seniority Trap, even though I expected more from it.

On the other hand, I also had a goal to 10x my residual income and I completely missed that goal. I’m not particularly dissatisfied because the raise I got by changing jobs completely compensates for this miss. Still, I was particularly sorry for one deal that I thought we made with a potential partner, but in the end, it was never realized.

So what happened this year?

I had the chance to present at 4 different places. I had to withdraw my proposal from C++Now as it went physical again and I knew it would be impossible for me that time for me to travel. In addition, I wouldn’t have been able to get any funding. On the other hand, I had the vacation of my life! Also, as I mentioned, I finally managed to go to a non-virtual C++ conference. I had such a great time at C++ On Sea. I hope this year I’ll be able to have a similar experience! 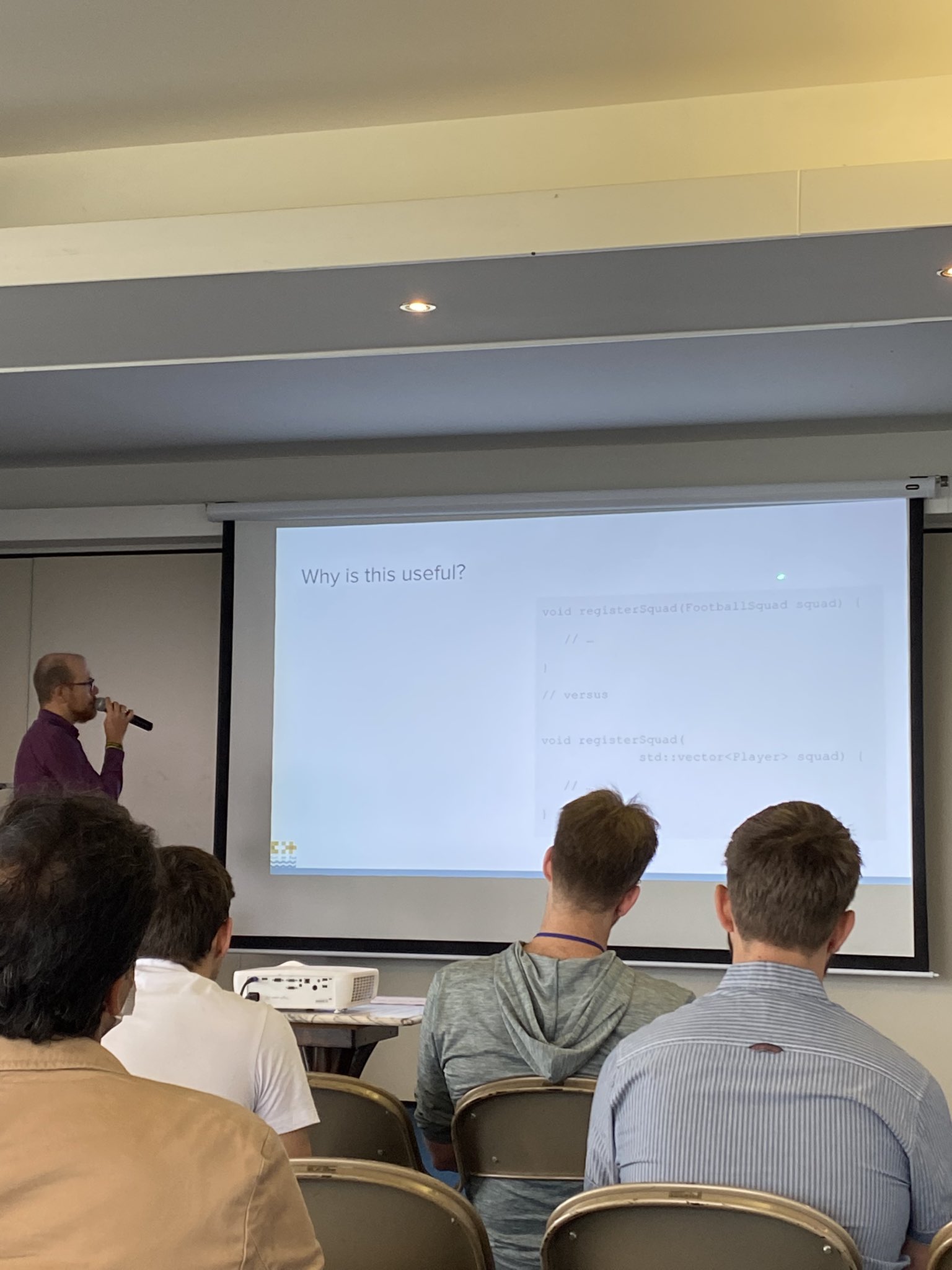 Me at my talk, thanks for the photo, @hniemeye!

The only thing I’m sad about is that even though I presented online at CppCon later in the year and I had access to all the talks, I could not follow the talks as close as I wanted.

I finished writing and published The Seniority Trap which is about my take on how to stay motivated in senior, senior+ roles where you often have less and less time for what you love doing. That is coding.

I have two projects in mind, one is ongoing. As I mentioned last year, I really enjoyed The Phoenix Project which unites a novel with educational IT content and I write something similar in style, but I doubt it will be ready to be published before the end of 2023, beginning of 2024.

I still make similar amounts from my Leanpub publications as before, The Seniority Trap hasn’t added much to the royalties. I also published 2 courses on Educative.io and even though it was an interesting work, it clearly didn’t bring as much money as I was hoping for.

As I mentioned I had some discussions for a side project that would have brought in a considerable amount of money, but it didn’t work out. The only thing I’m sad about is the ghosting part.

I managed to keep posting at least one post per week. I’m happy about that, but what I’m the happiest about is that I’m still posting about what I learn. That’s the best part. I learn, sometimes I relearn, I recap and I share.

Last year I was celebrating reaching 10k views a month, this year I went to around 14k, but I had two months above 20k. The number of subscribers to my newsletters is steadily growing. I’m really happy that so many people value my work, though the sheer numbers are still not the most important to me. If it was I wouldn’t have been so surprised about the numbers I shared. For months I didn’t even check. But it’s definitely an astonishing journey, in the beginning, I had a few views per month. A few of those were coming from me and from my uncle.

The thing I’m the happiest for is that people send me messages when I make mistakes. I know they care and I know they pay attention and they help me grow! Thank you!

As I keep saying, they are the most important. Also, they are not so much relevant in terms of this blog. As I was leaving Amadeus, I took quite a few days in the last two months which I spent together with my wife eating out and visiting quite some museums that we haven’t visited in the last 9 years since we moved to the South of France. We should have done more of these days during the last few years.

My daughter started elementary school. She has a lot of homework to do. It turned out quickly that I’m the more patient teacher among my wife and me, so I learn with her every night. It’s tiring and it requires way more patience than mentoring at the job. But the payoff is just great. Observing the growth in how she moved forward from slowly spelling out a few characters to reading out loud full sentences… that’s the biggest gift.

My son moved to the middle section in kindergarten and he also developed a lot. I’m amazed by how many letters and numbers he knows already and how much he pays attention while I learn with his sister. But these last few weeks have been very difficult. He’s been sick a lot and I feel he’s a bit exhausted. I hope he’ll get better soon.

The holidays of our life

At least so far :) This year, we spent around 3 weeks on the Azores islands visiting 6 out of the 9 main ones. We took ferries and small planes, drove around a lot and even met my uncle who lives in Sweden. We managed to spend a couple of days together at this remote place and he met my kids for the first time.

We absolutely loved the islands and would be happy to go back anytime to visit even more. Though probably it won’t happen in the near future.

That’s a lot of talking about the past. But what about the future?

I want to hit the ground running at Spotify as a senior engineer and bring significant value to the team. As it’s a very diverse team, I also want to profit from it and learn a bit of mobile engineering.

I want to also show by the end of the coming year that I’m capable of performing on a higher level and I can find some opportunities to do something transversal.

I’d like to prepare at least one new presentation this year. It’ll be about programming practices and executable sizes and I hope to find some places where I can share my learnings.

As I mentioned I have two ideas for books, one is more technical the other is more similar to The Phoenix Project, a novel combined with technical aspects. I definitely want to finish the vomit draft of the latter one and probably even the draft of the technical one, though I’m less confident about that one.

At the beginning of 2022, I finally started to learn to play the guitar again, but I found it very difficult to spend enough time on this hobby. This year, I want to dedicate at least 3x times a week 15 minutes to get better at it.

I also want to follow some healthy sports habits, I’m more or less happy with what I achieved by the end of the year. I go for a 4-5 km walk almost every night, I use my chest expander 5 times a week and next year I also want to become a regular user of my pull-up bar.

Last but not least, I want to find a few minutes every evening before going to bed to do a bit of journaling. I used to journal, but I neglected it during the last few years. It’s time to get back to this great habit.

2022 was a great year in many aspects. First I had an exciting internal move, and then I decided to change jobs and joined the Spotify band. I enjoy being there a lot!

I travelled to my first onsite C++ conference in the UK and I also travelled with my family to our dream vacation!

I’m pretty confident that 2023 will also be a great year! I’ll do my best at my new job and I’ll keep working on blog and book drafts!

I wish you all a happy and successful new year!

2021: I feel I got everything I wanted and the next year will be even better

It’s the end of the year so it’s time to draw a balance between what happened and how I progressed at work and in life in general. I deliberately speak about progress, because I think it’s more i...

2020: A year of changes and great results, can't wait for the next one!

It’s the very end of 2020 and it’s time to review what happened this year, what I achieved, where I failed and what I am going to do next year. I make it public for better accountability and maybe ...

Confessions of an addict: Just a few lines...

Just a few lines… That other night I was struggling. I felt an urge to write some code. I hadn’t written any during the day. Barely during the week. Am I a developer or what? How can it be that I ...